The results are in!

I am delighted to let you know the results of the dye analysis, which has helped confirm the age of the fabric due to the use of dyes.

For those of us who don’t really get what the above means:

The red is cochineal;

The blue is either indigo or woad;

and the green is a combination of three dyes; indigo or woad and (this is the surprising bit) fustic and black oak (aka quericitron). 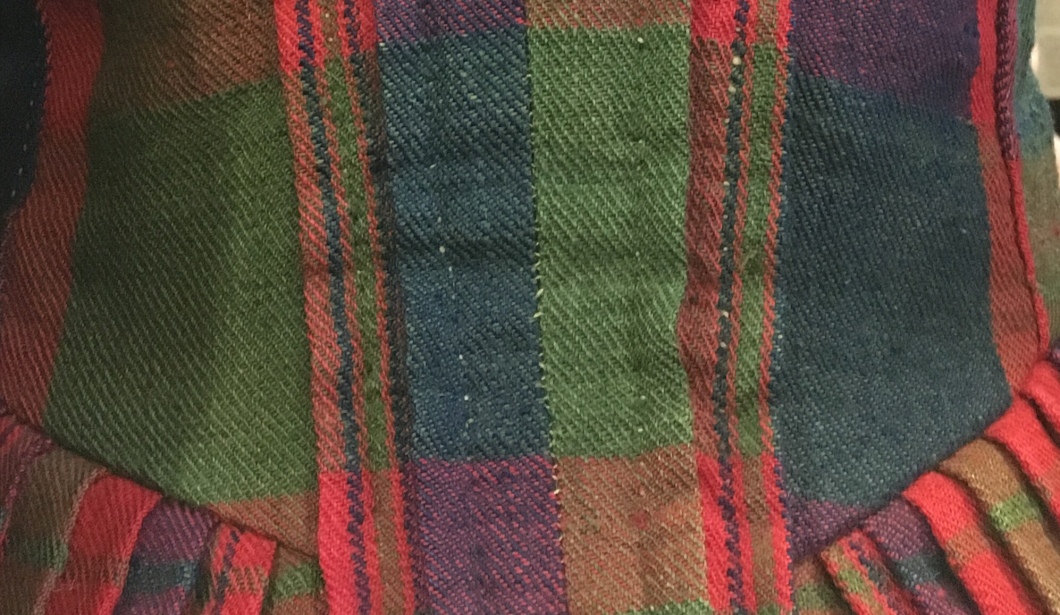 Due to the use of quericitron, we can accurately date the fabric to after October 1775, which is when it was first imported into Britain by the incredibly interesting and entrepreneurial Edward Bancroft, who was originally a chemist in Massachusetts, a friend of Benjamin Franklin and ultimately revealed to be a double agent during the American war of Independence.

Image of Bancroft, accessed from his Wiki page on 9th October 2018.

It was Bancroft who named the dye querci (oak) + citron (lemon), although it was – and still is- referred to as black oak.

Here’s a link to his biography, which you can most read free of charge on Google Books.

Bancroft wrote and published a book on natural dyes in 1814, which you can read for free on the wonderful archive.org in two volumes:

It might be a bit surprising to hear that a relatively new dye had found its way into Isabella’s wedding dress, so I decided to do a bit of reading into what things were like in Inverness-shire in the 1780s. A common perception is that the land had been devastated following Culloden and the harsh treatment by the British and that this pretty much carried on into the Clearances. I have also seen it claimed that the skills of weaving – especially of tartan- and the spinning and dyeing of wools had been forgotten or lost.

In his report to the Scottish Parliament in 2008, Professor Hugh Cheape stated that: “Colour and quality were evidently important for eighteenth and early-nineteenth tartans and research showed that red and yellows, for example, which appeared to have been popular in early tartans and supplied the bulk of surviving evidence derived from imported rather than ‘native’ dyestuffs.  Trading connections were vigorous and enabled dyestuffs to be imported into Scotland from an early date.  They are evident in the earliest surviving sources,  for example, madder and woad in the late fifteenth-century and indigo in the seventeenth century, and insect reds being used rather than madder when they became available.  These materials became widely available through travelling traders and a dynamic network of fairs and markets.  Demand and expectation were high in areas now perhaps perceived as remote from the larger market centres and evidence showed that there was regular and frequent communication between the Hebrides and the Clyde.” (the unpublished report was kindly supplied to me by Hugh in an e-mail).

It is true that for the few years following Culloden, life was incredibly difficult for Highlanders. This has been written about a lot and I highly suggest delving into the work of Professor Murray Pittock on this.

However, by the mid 1750s, the Forfeited Estates Commission decided that the best way to deal with the ‘lazy’ Highland women was to set up spinning schools and teach them all to spin (I won’t write any more about what the delightful General Forbes because it makes my blood boil).

And spin they did.

David Loch, a shipbuilder and merchant from Leith, became the Scottish chief inspector of woollen manufactures (appointed to the position in the early 1770s by the Honourable Board of Fisheries, Manufactures & Improvements). He toured a good part of Scotland (the borders, lowlands and eastern coast up to Cromarty and across to Inverness, but left out the northern isles, the Hebrides and the majority of the Highlands) in 1776 and then published a very interesting book, which is free to read online here, which gives us a very interesting snapshot of how important both the linen and wooden trades were to Scotland by that time.

It is not surprising, for example, to find out that Aberdeenshire was heavily involved in knitting both woollen and worsted stockings. Nor is it surprising to read that spinning machines and fulling mills were starting to make their way into the larger industrial cities.

However there are some things which do jump out. I have seen it claimed that by the late 18th century dyeing with indigo had overtaken dyeing with woad to produce blue dye in Scotland. However, Loch specifically mentions woad dyeing and tells us that two gentlemen in Haddington, East Lothian, prepared a huge four tonnes of woad annually (plus he further mentions several dyers with busy woad vats).

Interestingly, the only specific and direct reference Loch makes to ‘Highland plaids’ is Stirling (this was before the repeal of the Act of Proscription): 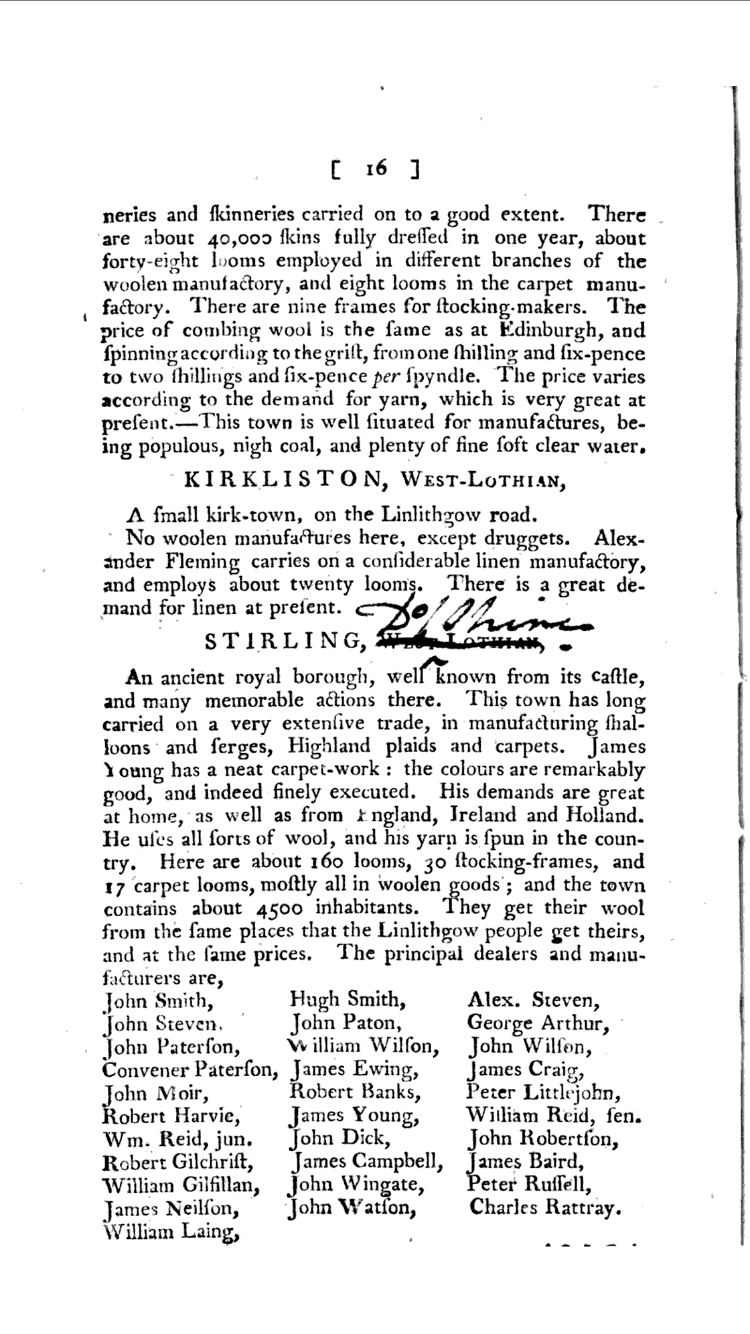 Screenshot of page 16 of Loch, David (1778) A Tour Through Most of the Trading Towns & Villages of Scotland

Here is Loch’s description of Inverness in 1776:

Screenshot of page 56 of Loch, David (1778) A Tour Through Most of the Trading Towns & Villages of Scotland

By the time of the Old Statistical Account in 1791, Inverness was a thriving market town with 57 weavers – the weavers becoming one of the town’s six incorporated trade guilds- and 12 dyers. (I’ll be writing more about the weavers and dyers of Inverness at a future date).

There was also a thriving production of natural and dyed linen thread (which started in the early 1780s and employed over 10,000 in Inverness and the neighbouring counties).  Over 1000 men, women and children worked in the hemp business (which started in the late 1750s/early 1760s). The flax, by the way, was not produced locally but was imported from the Baltic states . Inverness-shire textiles were sold all over the world, through London. It was noted in the OSA that the increase in trade with the East and West Indies, since the late 1750s, had significantly improved life in Inverness and was one of the main reasons for the improvements in the town and area.

In summary, lots of fabric was being made in Inverness-shire in the 1780s and it wasn’t a poor town. And it was only sixteen miles down General Wade’s road – the one linking Inverness with Fort William – from Ruthven the farm & township where Isabella was born, grew up, got married and gave birth to her first three children. Not a daily journey back then, but certainly possible on a horse.

However, we still have the question of where did Isabella’s dress fabric come from. While we will never know for sure where exactly it came from, nor who made it, here are a few clues.

The width of the fabric is not standard (someone might prefer the word ‘uniform’ here). It measures between 64.05cm and 65.5cm, and therefore could be described as being woven by an inexperienced weaver. It seems unlikely that there would be that much variation in width due to waulking, and there also are not any visible differences in tension or changes in quality at the edges of the fabric.

Loch (1778) makes reference to cloth being taken off the loom and not being finished as being substandard and something that hadn’t been done for fifty years, which would seem to suggest that by the time he was Chief Inspector of Woollen Manufactures the practice of using fabric directly from the loom had been phased out in Scotland.

There are no finished (start or ending) edges in the hems of Isabella’s dress which would indicate that the nine metres used in the dress were cut from a longer piece of cloth.

Given that there were twelve dyers in Inverness and the port frequently hosted ships from London, the Baltic, and the East and West Indies (and quite possibly from America as well), it seems sensible to expect that is where the dyes were purchased to dye the wool in Isabella’s tartan, or perhaps from one of the travelling traders mentioned by Professor Cheape in the above quote. It is quite possible that the wool was dyed in Inverness – there is a uniform depth of colour to all the wool which indicates it was dyed by an experienced dyer, which I would argue is strengthened by the use of new(ish) yellow dyes- but again there is no way of knowing for sure. It is interesting to note that Wilson’s of Bannockburn (as recorded in the archives held at the National Library of Scotland) recorded their dye recipes in 1783 and they included the use of Jusstick (fustic) and Yellow Wood (which could be black oak), so it would make sense that the dyers of Inverness also used similar recipes.

As for the spinning of the wool, the 1755 census of the forfeited estates indicates that Isabella’s mum, Anne MacKenzie, was probably a spinner which means she no doubt would have taught her three girls how to spin. It was quite common practice for wool to be spun at home then taken to be dyed and spun by professional craftsmen. We know that there were plenty of sheep at Ruthven, and that the sheep had not been ‘improved’ before 1785 (that would come a few decades later) so the ‘old Highland breed’ of the Scottish Dunface.  The Dunface is unfortunately extinct but is similar in textile properties to Shetland wool.  It is quite possible that the wool was spun at home by Isabella and her female relatives – but again there is no way of knowing for sure. The hard tartan fabric  was made from combed, not carded, singles Z-spun wool and does have very similar qualities to other pieces of tartan known to be spun from the Dunface. The wool was spun by experienced spinners to a uniform fine width of approximately 32-36 wraps per inch.